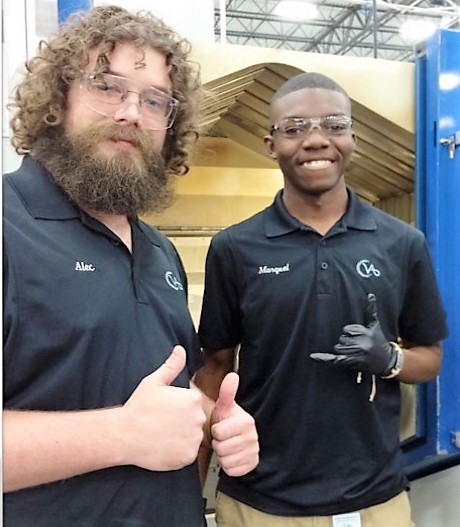 MARQUEL ROLACK-SMALLS, pictured on right with his industry mentor, is currently a student at Clemson University studying mechanical engineering. Marquel was a member of the first cohort of machine tool technology youth apprentices in the Charleston Regional Youth Apprenticeship Program. Hired by Venture Aerobearings, a world-class aerospace bearings manufacturer, Marquel began his apprenticeship in the fall of 2015 as a rising senior at Woodland High School in Dorchester District Four. Always a good student, Marquel came into his own intellectually, academically, personally and professionally over the course of the two-year apprenticeship. Consistently challenged, encouraged and inspired both on the job at Venture and in the classroom at Trident Technical College, Marquel grew into a "rock star" of the brand-new machining program. With Marquel's acceptance into Clemson at the end of his senior year, he was faced with a difficult choice: to enter the University or stay and finish the second year of the apprenticeship. Marquel made the decision to defer his entrance into Clemson and stay with Venture and at TTC. After Marquel completed the apprenticeship and earned his associate degree from TTC, Clemson again accepted him and Venture Aerobearings helped with tuition, even outfitting his dorm room with everything he needed. He returns to work at Venture during school breaks and in the summer, and has moved from Bearing Technician to Engineering Intern. Looking ahead, Marquel has his sights set on a Ph.D. in mechanical engineering from the University of Waterloo, Canada, a school he visited during what he considers one of his favorite robotics competitions.